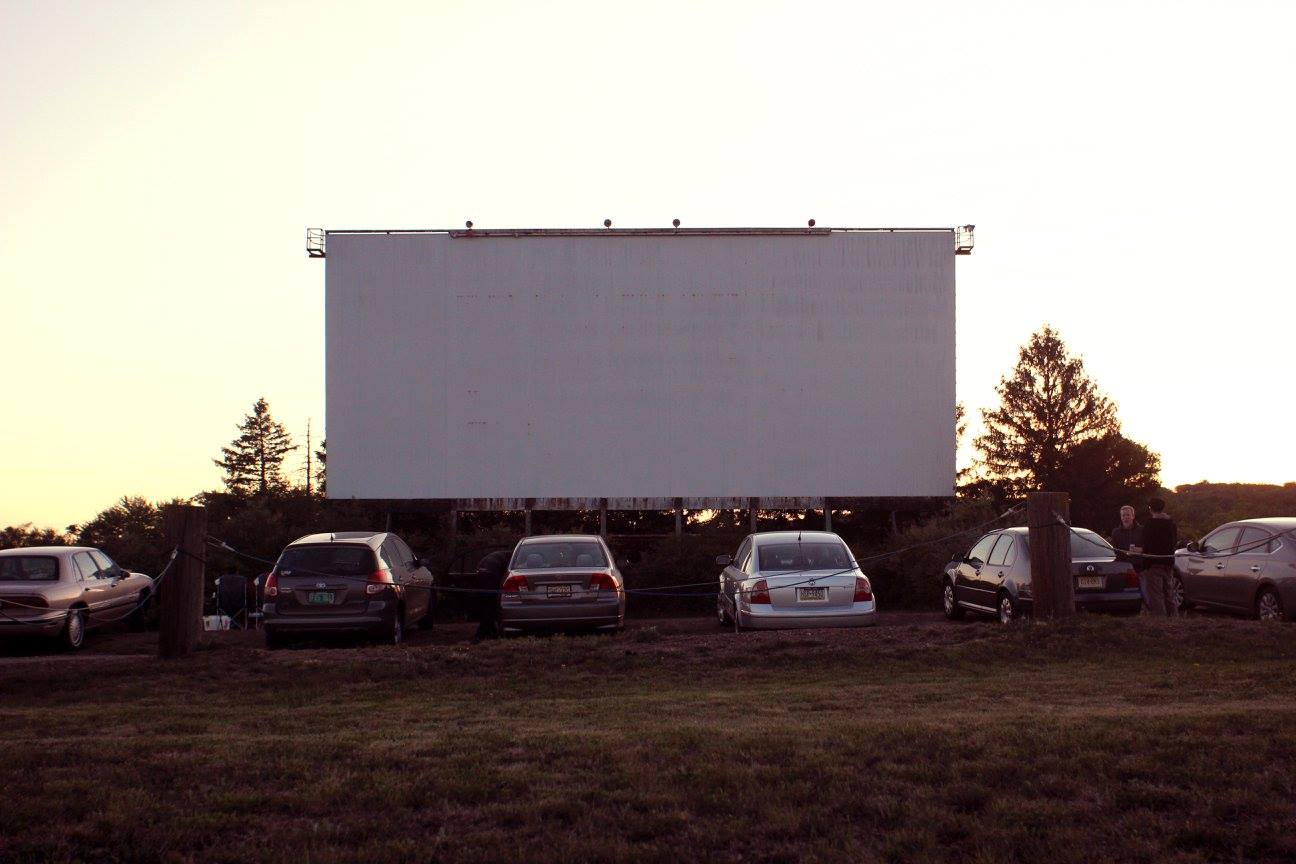 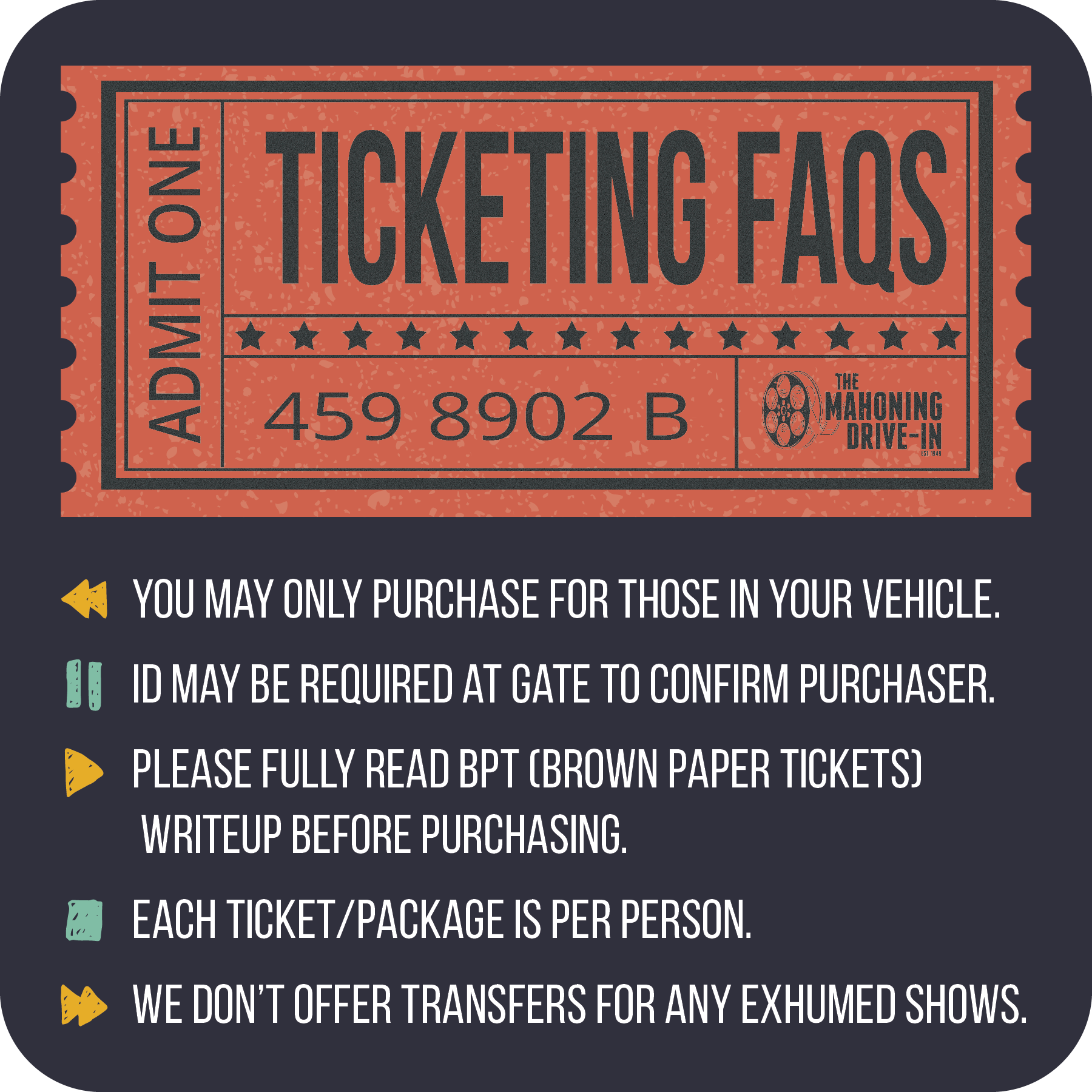 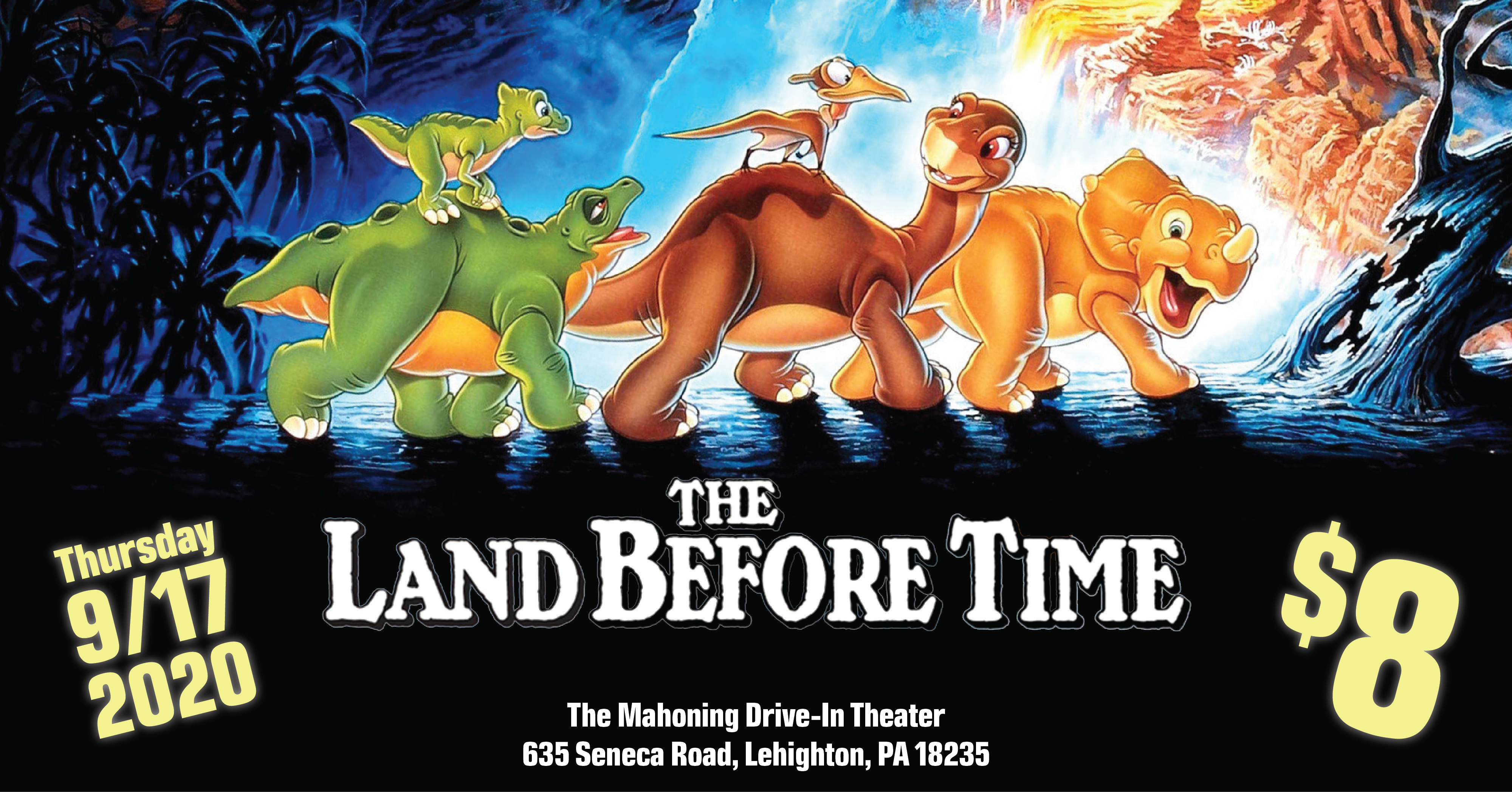 With a summer filled with edgy programming and staple events.. We take a breath with the Essential Family Classic THE LAND BEFORE TIME on Thursday, September 17th.
So load up the trunk, grab a radio and make your way out to The World Famous Mahoning Drive-in Theater!
Join Little Foot and the gang as they lead a prehistoric journey to your heart;) 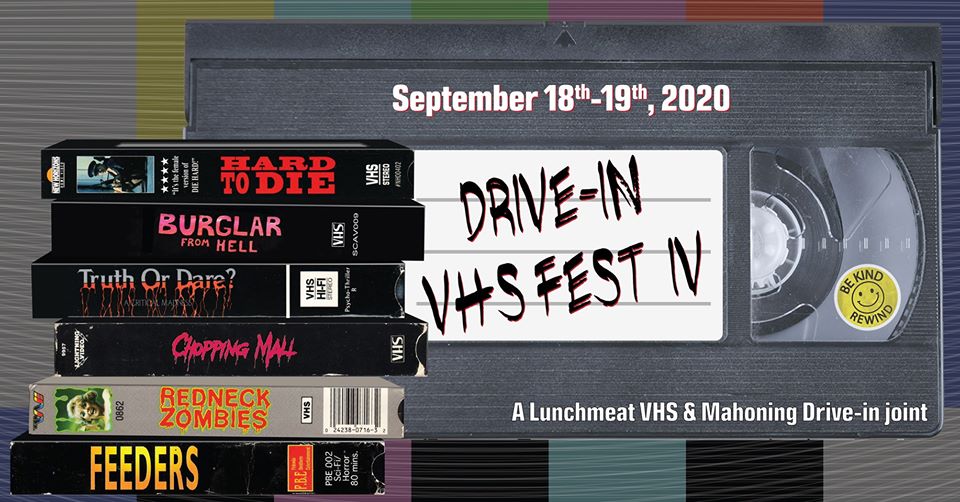 With all that is going on in the world today we feel blessed to be able to offer such a rich experience to our Incredibly Supportive Community. And anyone who is a fan of The Mahoning Drive-in Theater knows of The Legendary VHS-Fest..
Well, on September 18th & 19th our ode to the Almighty Slab returns for its 4th consecutive season!
We will be able to offer you all that you love about VHS-Fest in a very safe manner:
Tickets will be limited to allow for additional space.
Vendor space will be limited to allow for space.
Like all Mahoning events-masks are required on the move & social distancing is practiced. 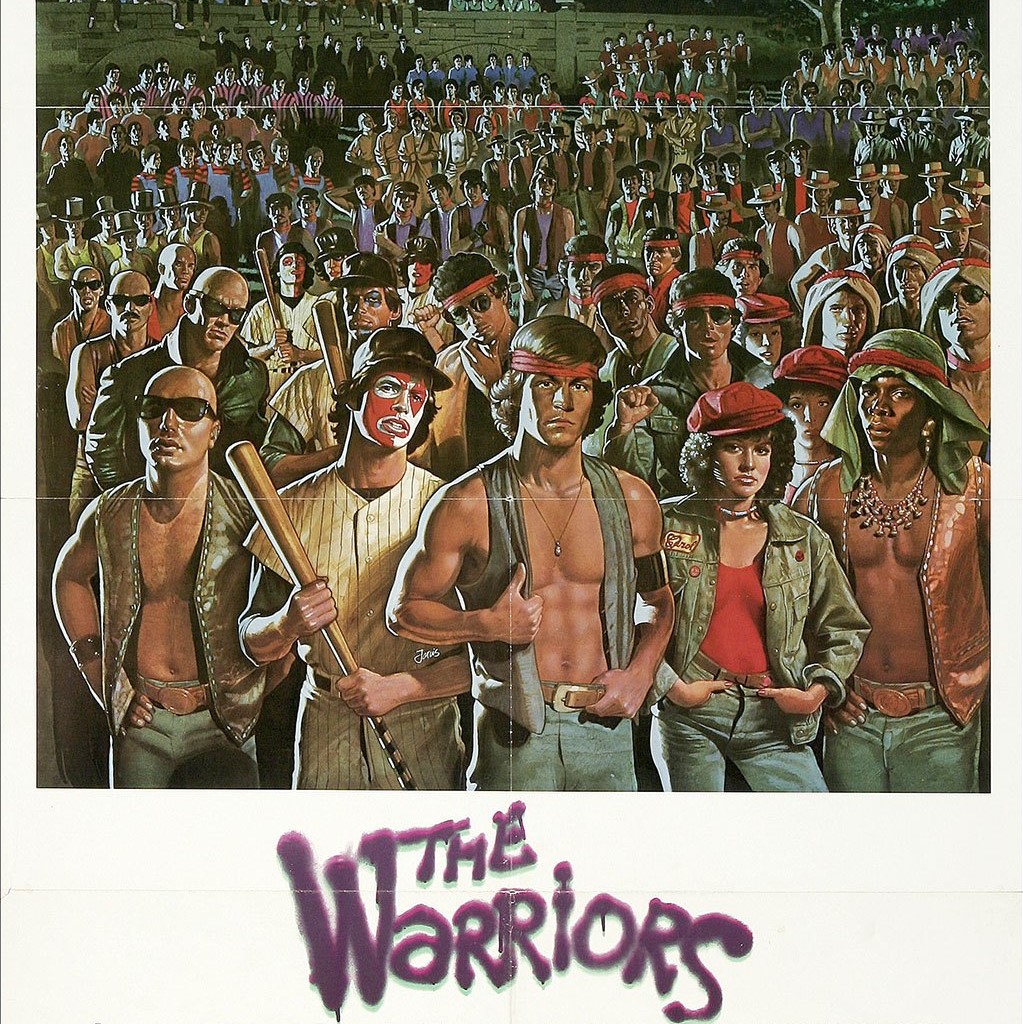 TUNNEL VISION TUESDAYS continues with even More Madness in September!
A Legendary Film Series dedicated to shining a light on classic Genre, Horror & Cult titles..
Each evening will feature an extended preshow of retro trailers, shorts & cartoons - followed by a single feature.
In true Mahoning/Exhumed style, all titles will be presented on original 35mm film!Join us on Tuesday, September 22nd for a Special Screening of Walter Hills THE WARRIORS (1979). 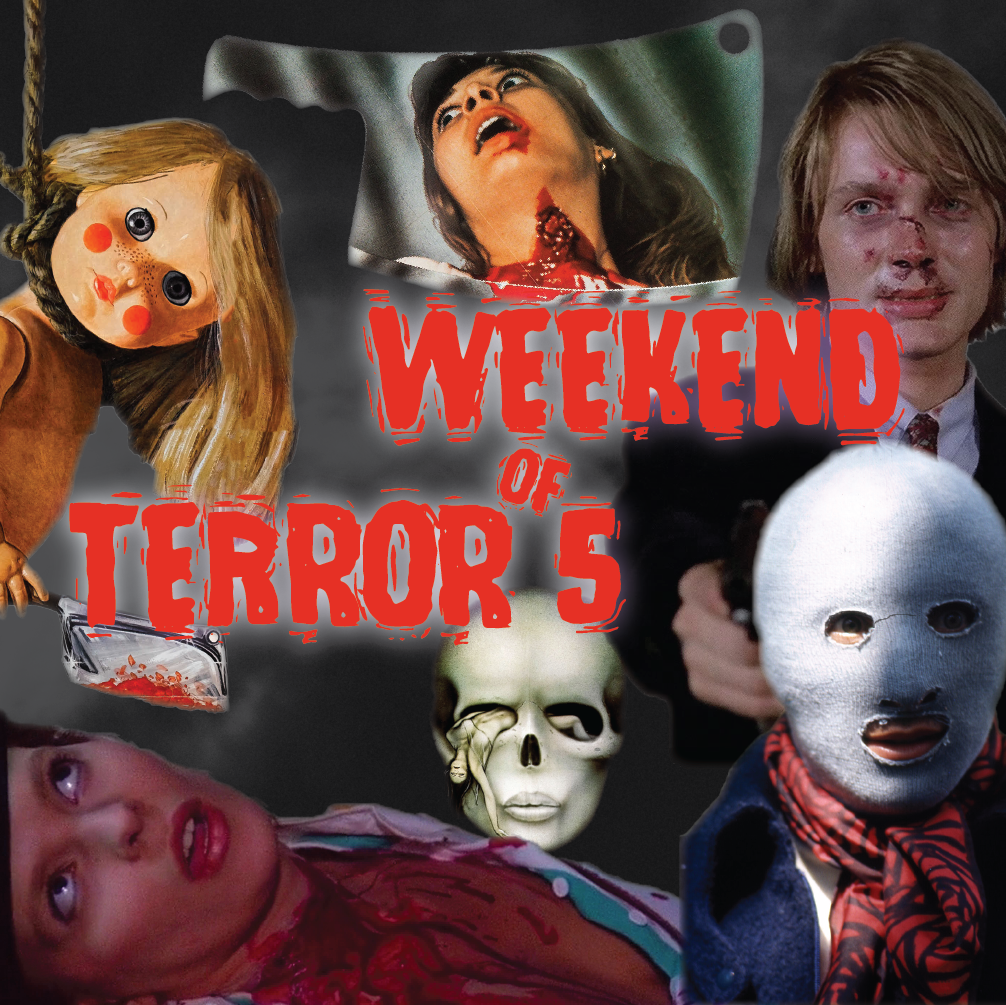 When was the last time you were really scared?!!! Nothing you have previously seen on the Mahoning Drive-In screen can prepare you for Exhumed Films’ WEEKEND OF TERROR V. On Sept. 25-27, we welcome you to the nightmare world of Italian terror with eight extremely shocking and gory motion pictures over three terrifying nights of serious fright! All films will be screened in glorious 35mm (except one 4K restoration)!There will be raffles, prizes, DiabolikDVD and Garagehouse Pictures, and we will have a special Italian Horror Blu-ray Super Sale featuring releases by Severin Films, Blue Underground, Arrow Video and more! Very limited edition event tees and posters by Jason Cortez will also be available! 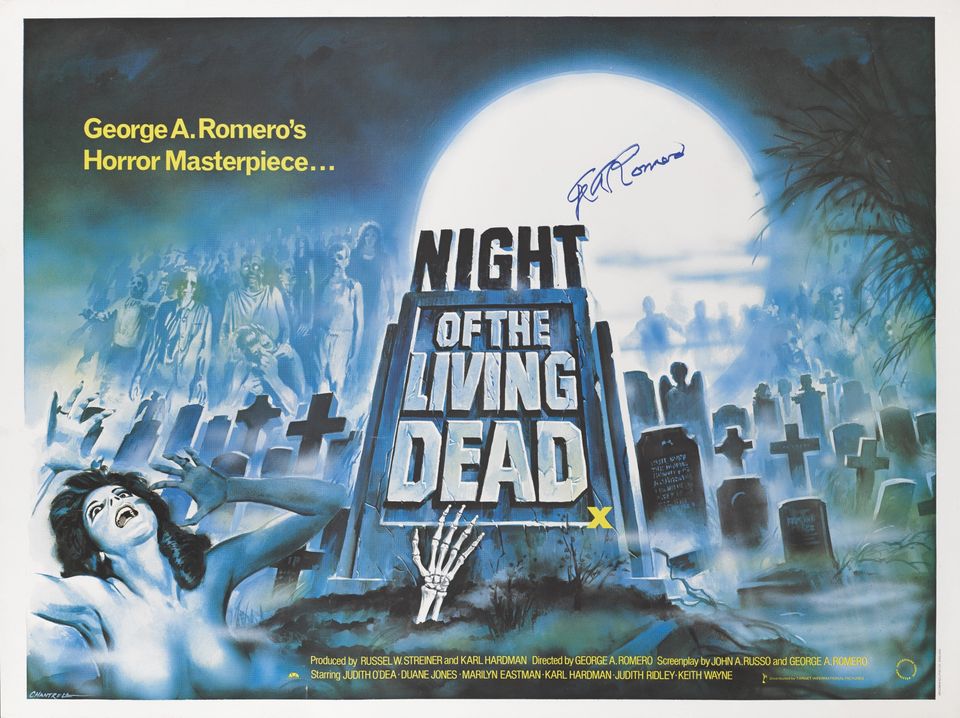 TUNNEL VISION TUESDAYS continues with even More Madness in September!
A Legendary Film Series dedicated to shining a light on classic Genre, Horror & Cult titles..
Each evening will feature an extended preshow of retro trailers, shorts & cartoons - followed by a single feature.
In true Mahoning/Exhumed style, all titles will be presented on original 35mm film!Join us on Tuesday, September 29th for a Special Screening of George A. Romero's NIGHT OF THE LIVING DEAD (1968). 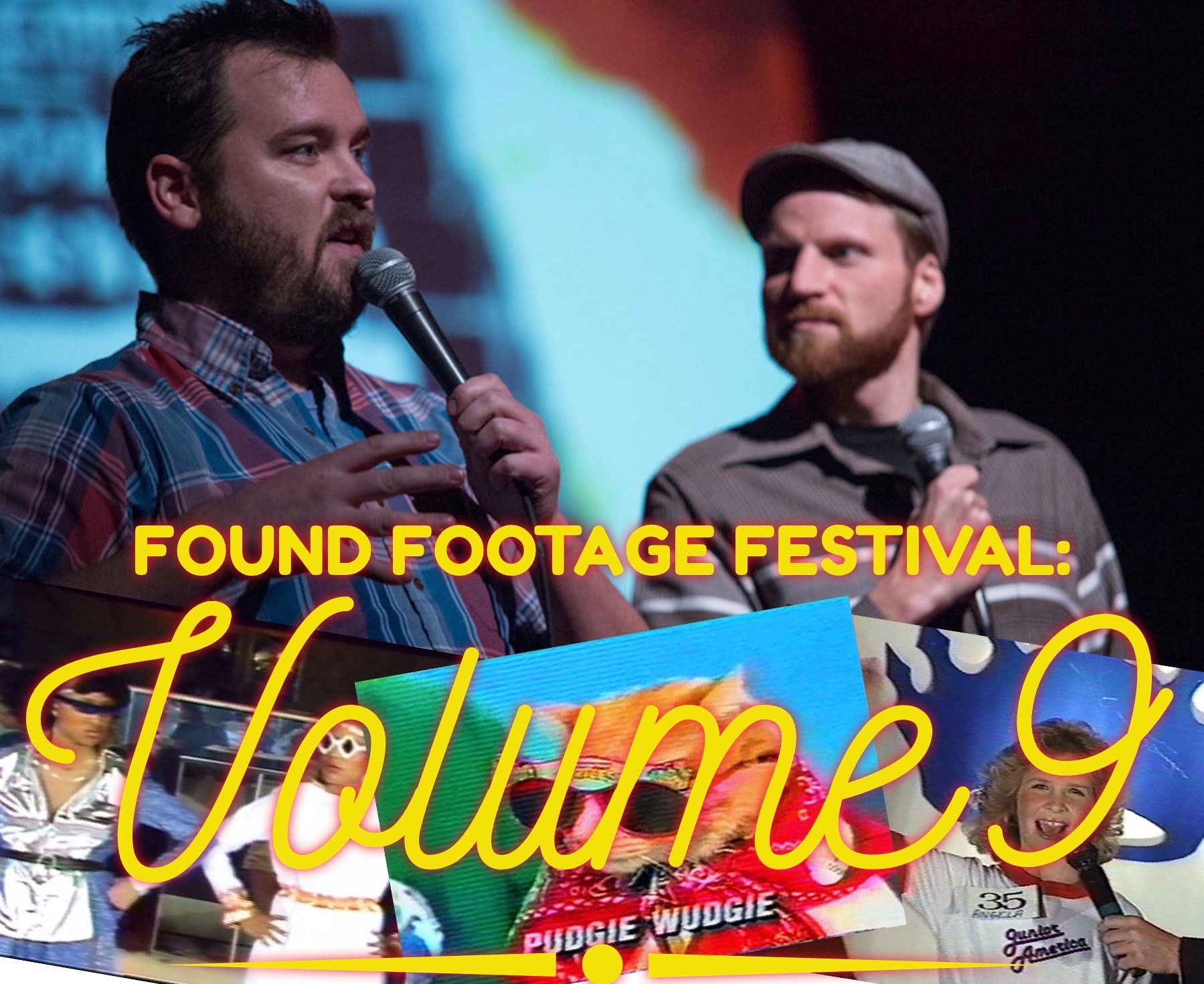 The Mahoning Drive-in Theater is proud to welcome Joe Pickett (The Onion) and Nick Prueher (The Colbert Report) for their live guided tour through their latest VHS finds, October 1st!

The Found Footage Festival is a long running one-of-a-kind event showcasing videos found at garage sales and thrift stores and in warehouses and dumpsters throughout North America. Curators Joe & Nick provide live commentary and where-are-they-now updates on the people in these videotaped obscurities. From the curiously-produced industrial training video to the forsaken home movie donated to Goodwill, the Found Footage Festival resurrects these forgotten treasures and serves them up in a lively celebration of all things found. 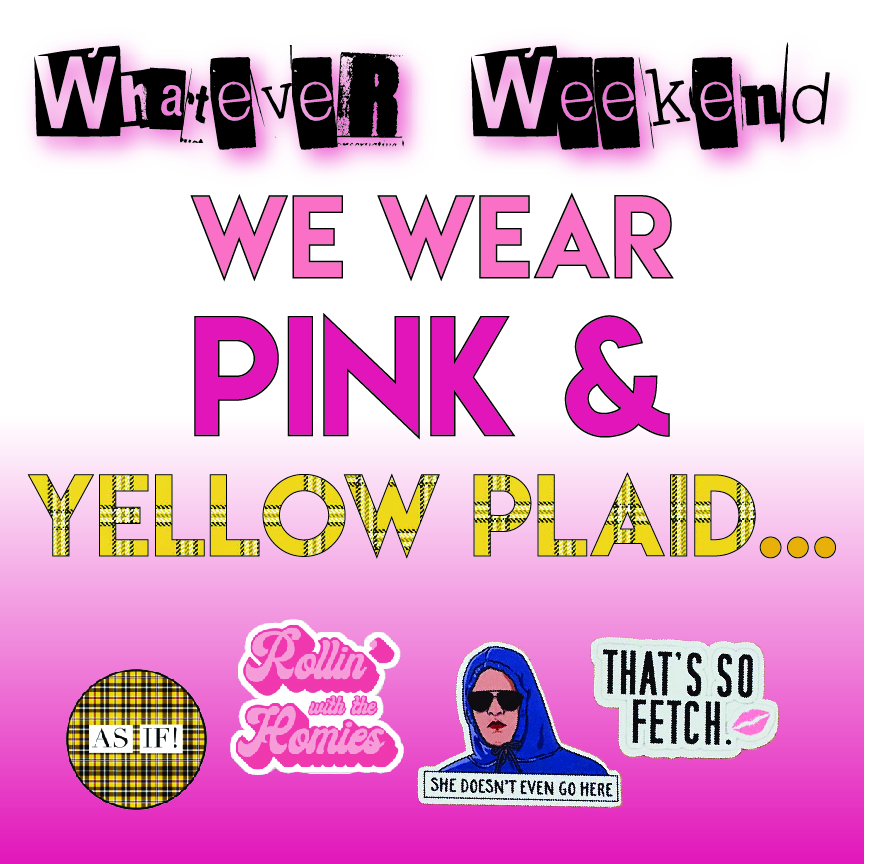 Get in loser, we’re going to the Drive-In for “Whatever” Weekend, October 2nd and 3rd!

We've got two fetch features from the turn of the millennium, taking on the trials and tribulations of teen girls who just wanna fit in, but may need a trip to the mall to go from Monet to Betty.

First celebrate the 25th anniversary of the 90s classic CLUELESS (1995), starring Alicia Silverstone as a Beverly Hills High student with an eye for matchmaking and makeovers, who sets about turning oddball Brittany Murphy from ugly duckling to swan.. Followed by MEAN GIRLS (2004), with Lindsay Lohan as the new girl in school who finds herself in with the in-crowd of not-so-nice ladies. And, yes, perfectly timed to screen on “Mean Girls Day”;) 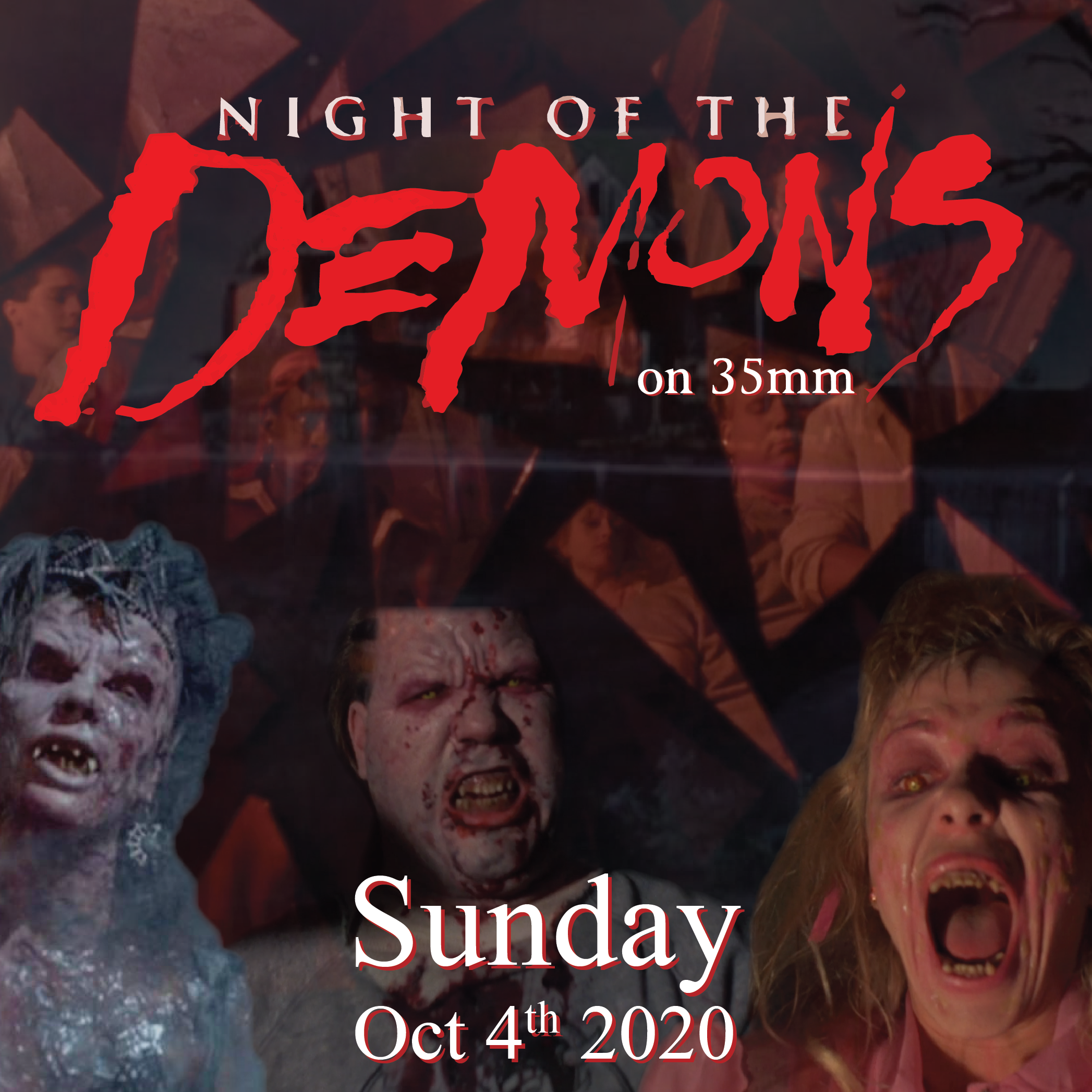 One Night Only!
On Sunday, October 4th: join The Mahoning Drive-in Theater & Exhumed Films in welcoming Amelia Kinkade for a special Single Screening of NIGHT OF THE DEMONS (1988) on 35mm!
Angela herself invites you to the Halloween Party you will not soon forget.. So pack up your gear and grab your friends.. You will need power in numbers in order to survive this Spooky Seance..
This event will include distanced Photo Op & Autographs opportunities by Amelia.
We will also be featuring extra Demonic Madness with an extended preshow + more;) 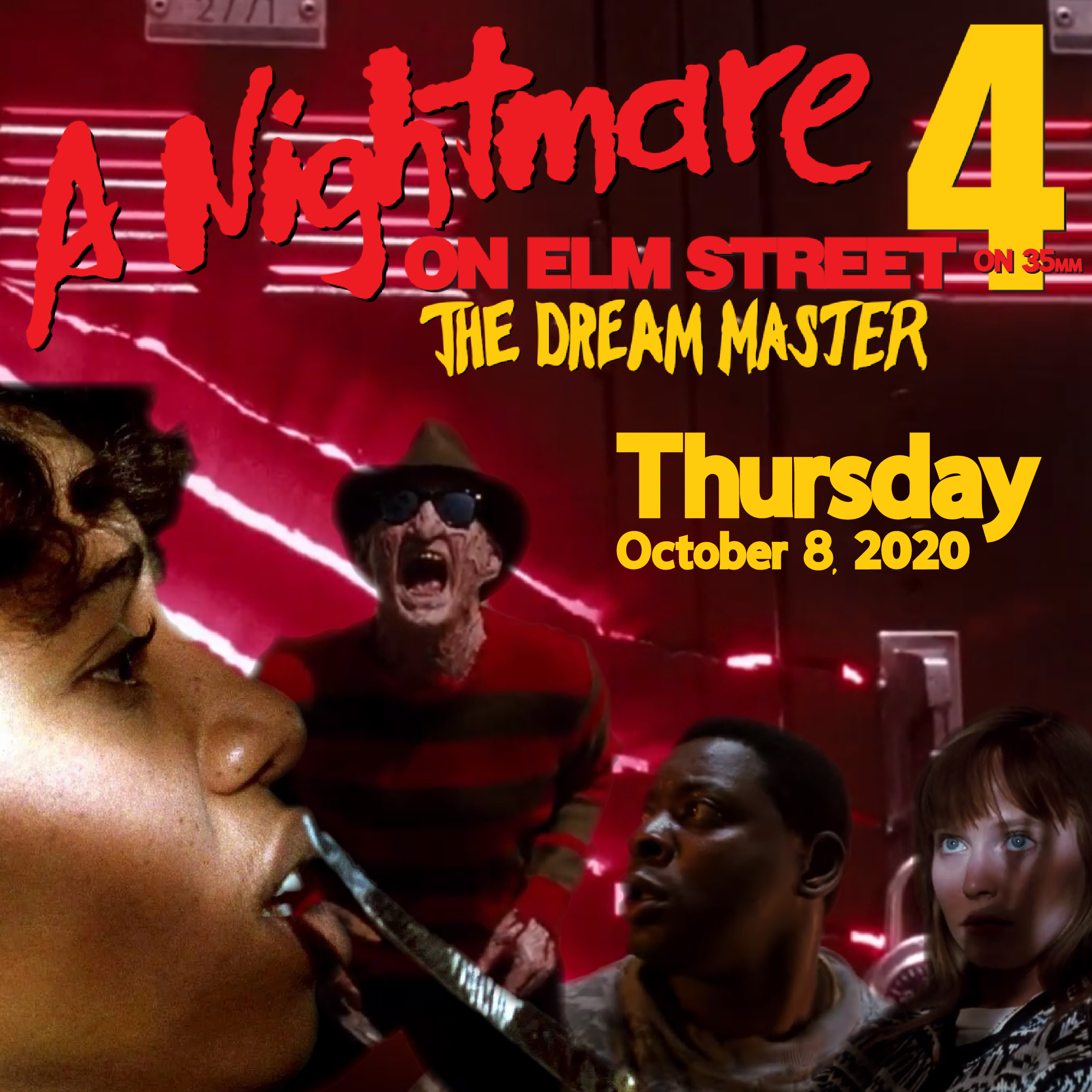 A Nightmare on Elm Street 4
(with CAST)

Hello Freddy fans! The formidable Freddy Fest II is almost here. Exhumed Films and the Mahoning Drive-In are so ready for Freddy that weve decided to add on a special pre-fest screening of A NIGHTMARE ON ELM STREET 4: THE DREAM MASTER on Thursday, October 8th! But thats not all! We have some of the original children of Elm Street joining us for the screening! We are very pleased to announce that we will have Alice, Kincaid and Shiela Lisa Wilcox, Ken Sagoes and Toy Newkirk (!!!) with us from the film, plus production designer Mick Strawn, special effects man Nick Benson and Mark Patton, star of A NIGHTMARE ON ELM STREET 2: FREDDYS REVENGE! It is going to be an Elm Street party at the drive-in, and YOU are invited! Get your tickets now! 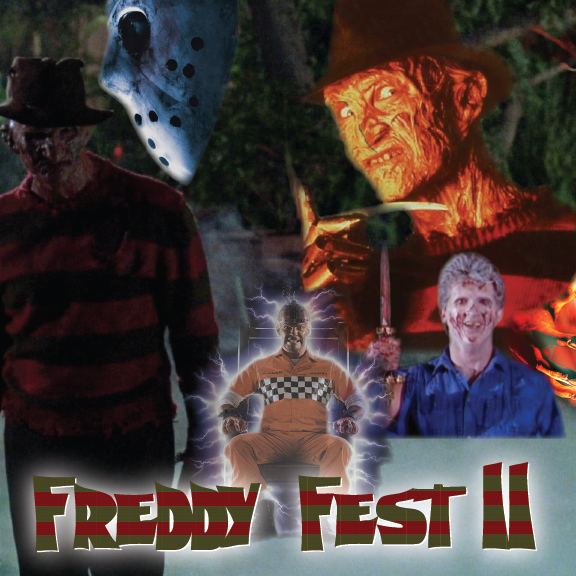 1, 2... Freddy’s coming for you... again! The man of your dreams returns to haunt the drive-in screen on Oct. 9-11th when Exhumed Films and the Mahoning Drive-In Theater present FREDDY FEST II! You wanted it, now your dream is a reality! This year we’ll be screening eight films over three nightmarish nights, and we’re going beyond Elm Street to showcase films inspired by the franchise, including one directed by Freddy himself, Robert Englund! There will be vintage trailers preceding each film, raffles, merch, event tees and posters, DiabolikDVD and more! This weekend is going to be a scorcher, so don’t fall asleep! 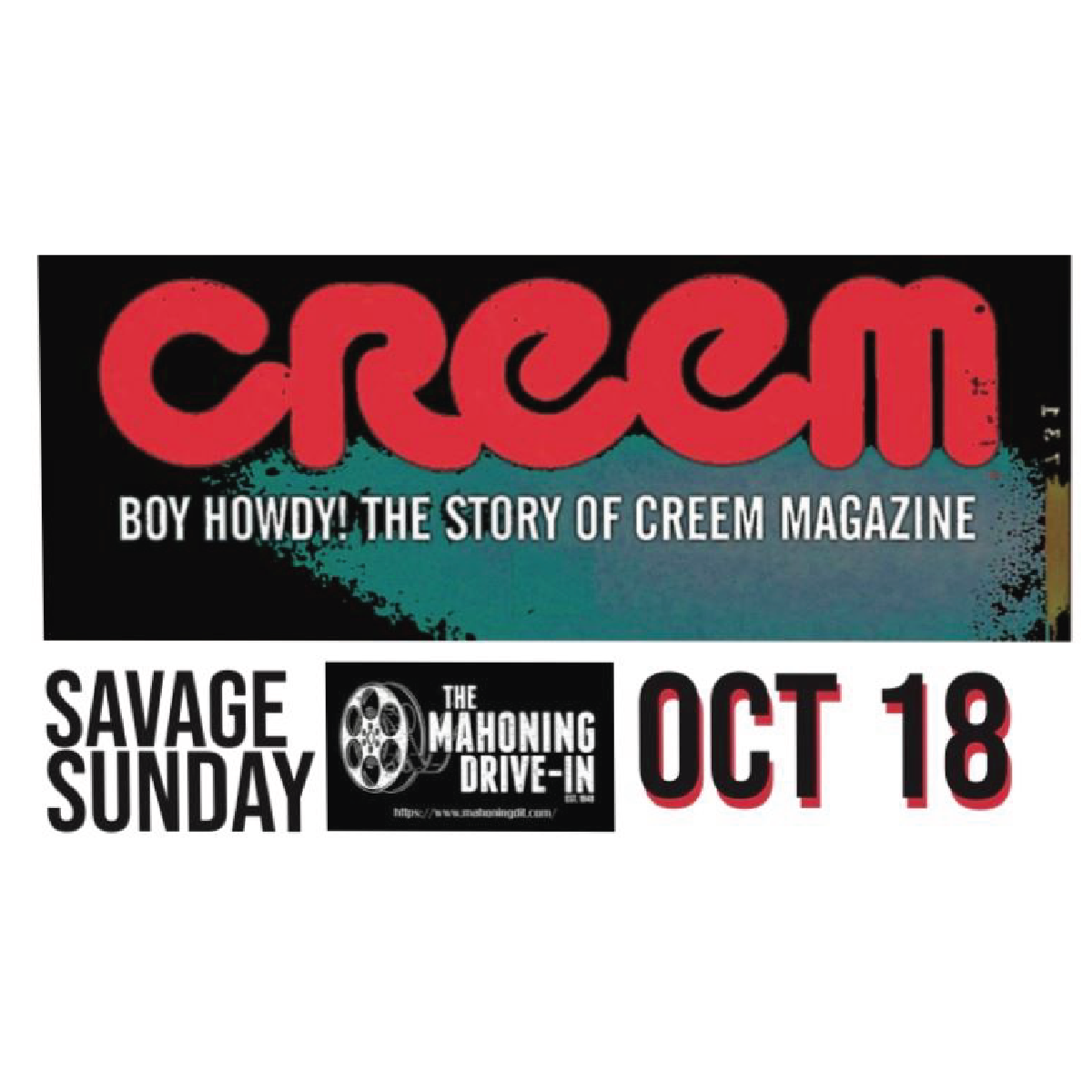 The Mahoning Drive-in Theater is happy to welcome Justin Savage as host of our Savage Sunday Single Feature with CREEM: Americas Only Rock N Roll Magazine documentary.
Join us on Sunday, October 18th for an all out ode to The Classic Rock Era!
Justin hosts several film series at The Palace Theater which features rare and independent films, often with guest appearances by the featured film's cast members, writer or director.
We have some Special Surprises for fans of this Rockin Event;);) 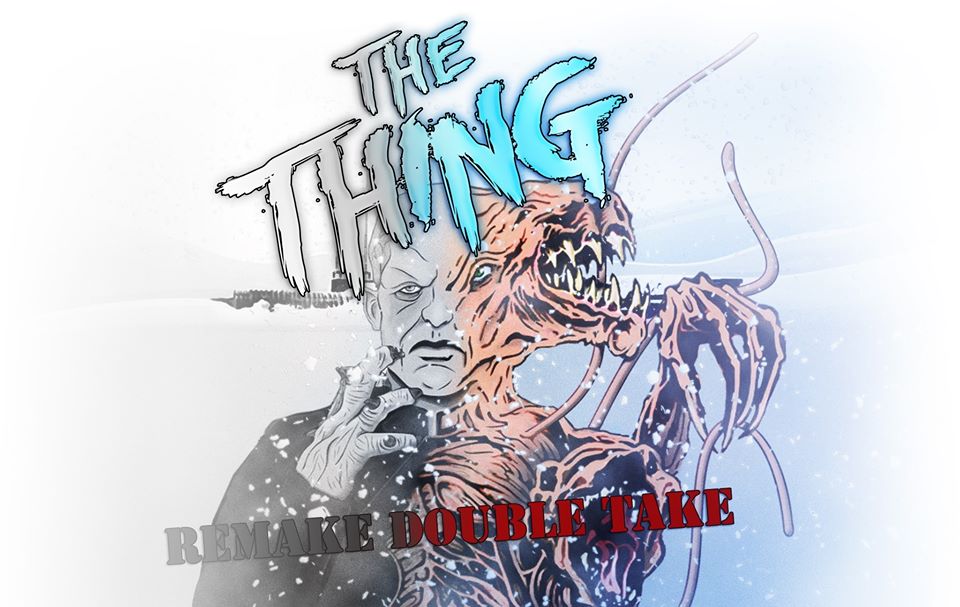 *This event has moved! For your health and safety, we have rescheduled this show for OCTOBER 23 & 24*

Some kind of 'thing' is coming... We're taking a Remake Double Take! We set off on an arctic excursion with the original 1951 classic, the epitome of 50's scifi, “THE THING FROM ANOTHER WORLD” followed by John Carpenters gripping frostbitten freak-show, 1982's “THE THING” which transforms our evenings expedition into an outright nightmare of shape-shifting extraterrestrial terror! It's two classic films and two distinct adaptations across two nights of sci-fi screams! 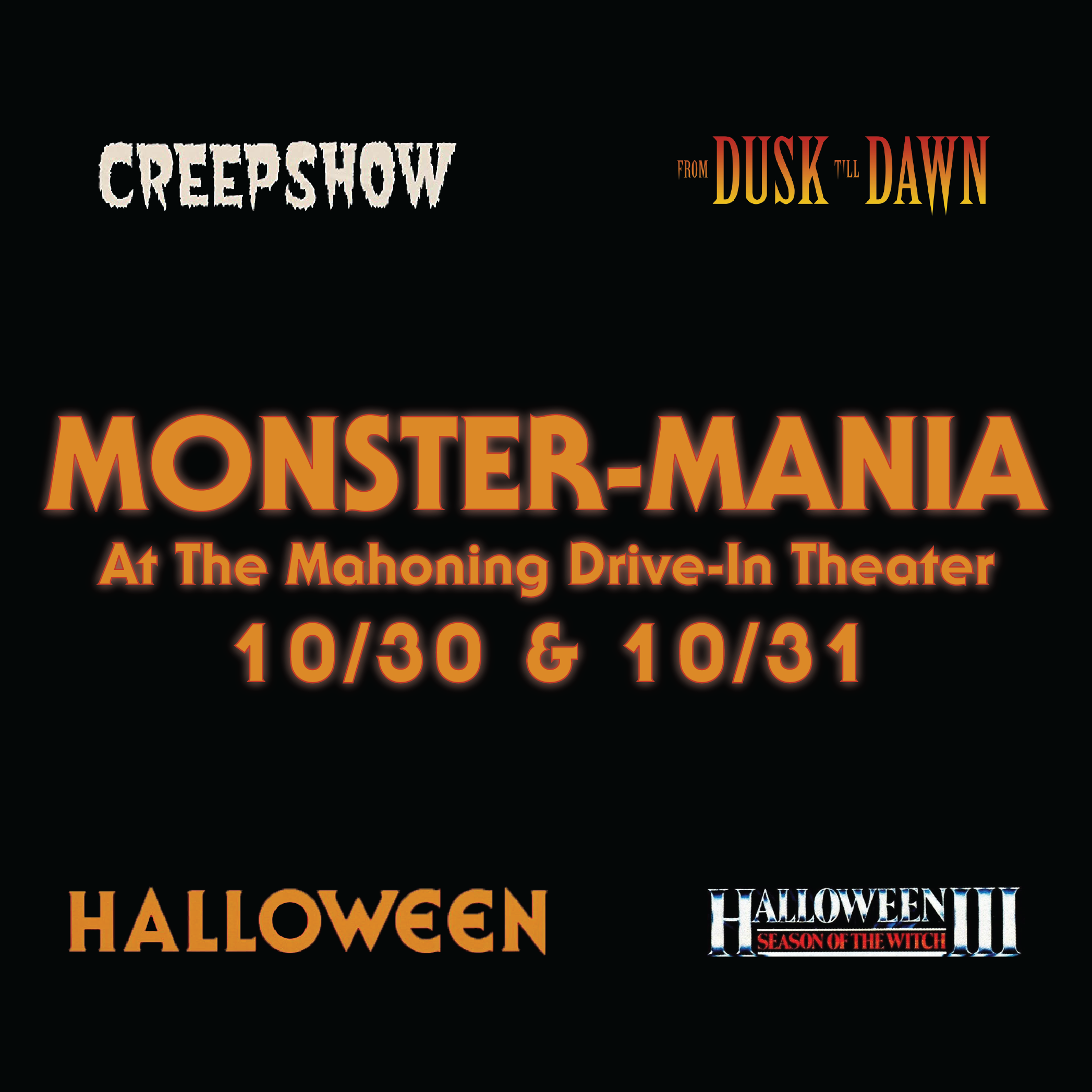 Monster-Mania
at The Mahoning

When every Convention across the country began to get canceled, then pushed back.. then back again.. All we kept thinking was one thing (as a team who vends at many conversations each year).. How Will Our Beloved Vendors Get Through This?!?
If there was only a way to bring the Convention experience in a safe way..
If only we could organize a means to bring our community back together..
If only there were a way to give our Vendors the opportunity to reach their fans this season..
Well.. Here We Come;)
Join us for History in The Making as Monster-Mania brings their long-running Horror Event to The Mahoning Drive-in Theater on Halloween Weekend!! 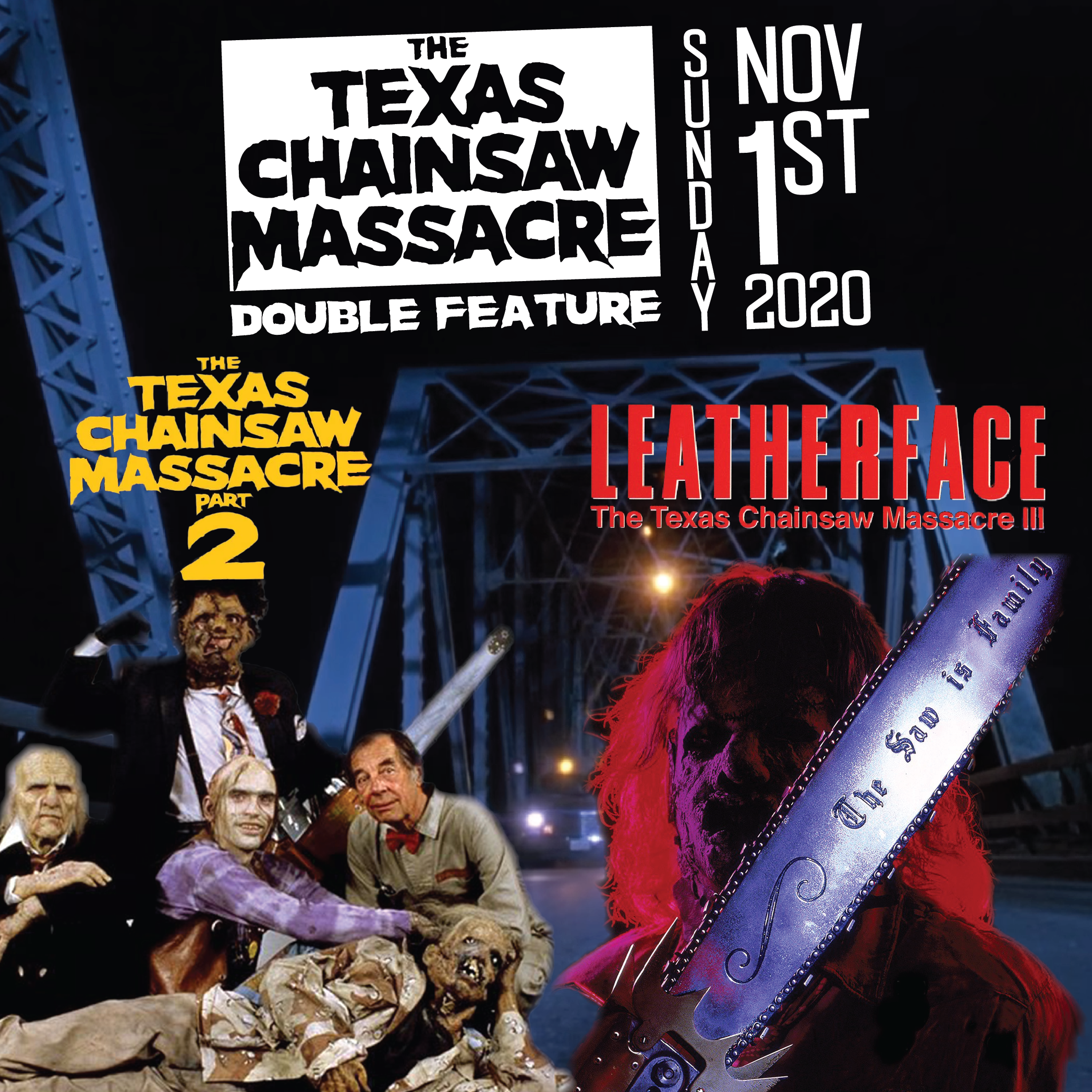 The Saw is family... and the Drive-In is family! On Sunday, November 1st, Exhumed Films and the Mahoning Drive-In theater bring you a very special end-of-the-season event. Bill (HOUSE OF 1000 CORPSES, THE DEVILS REJECTS) Moseley will be here for a 35mm screening of THE TEXAS CHAINSAW MASSACRE 2!!! Yes, Chop Top himself will be here live, signing autographs, appearing for socially distant photographs and introducing the film on the giant drive-in movie screen! But thats not all! Well also have a 30th anniversary screening of THE TEXAS CHAINSAW MASSACRE III (1990) as a second feature, and well have a special video introduction by director Jeff Burr! Its a CHAINSAW MASSACRE double feature, but its also going to be a party! 2020 may have been a rough one, but we are celebrating a tremendous, record-breaking season with one final blowout! More surprises are to come! Come out and join us Nov 1st, 2020! The drive-in is our life! 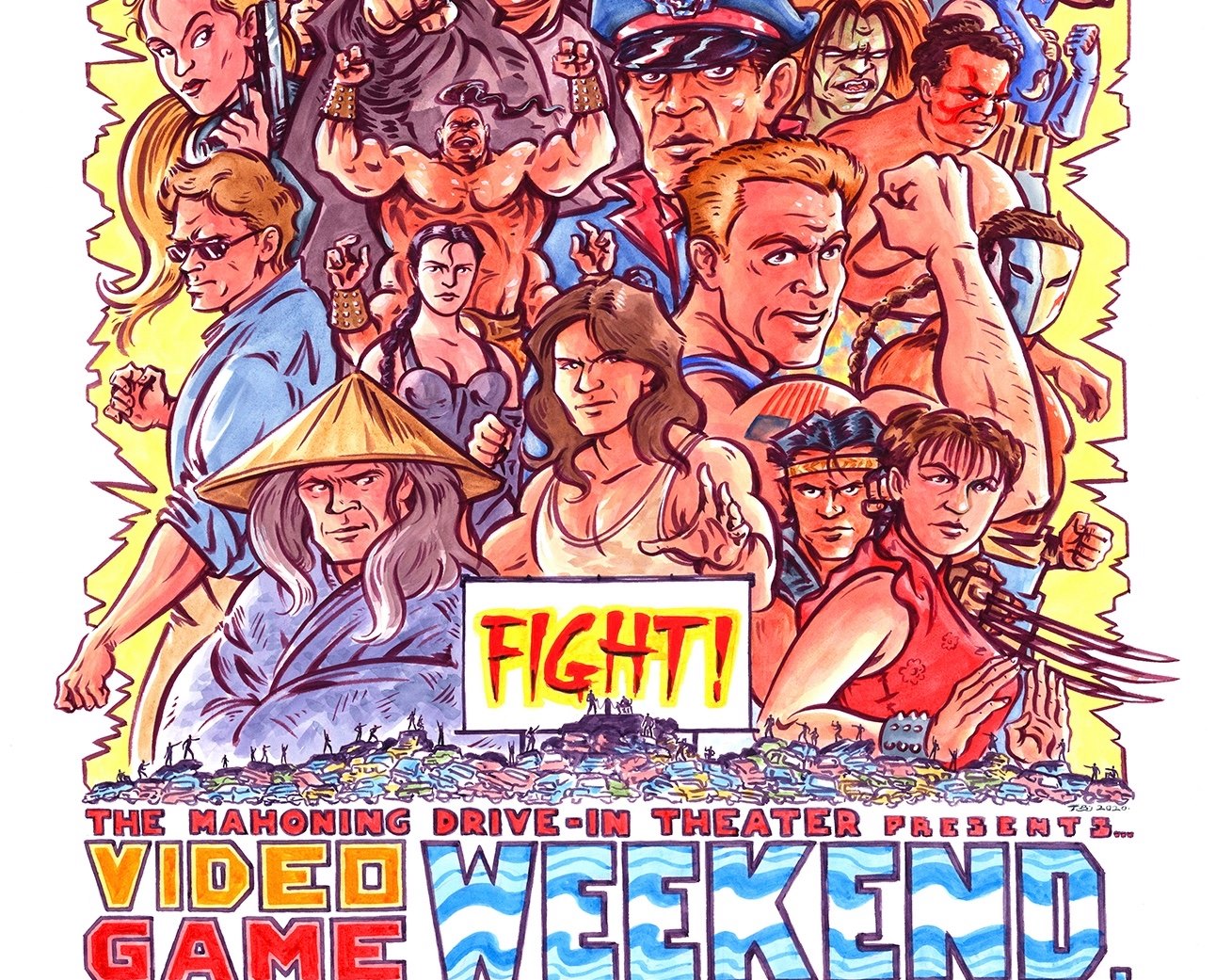 NIGHT ONE (Friday) ~ It's Street Fighter (the movie from 1994) followed by an high stakes single-elimination style tournament of STREET FIGHTER (the game).